Incidence:
It is estimated that the annual incidence of spinal cord injury (SCI), not including those who die at the scene of the accident, is approximately 40 cases per million population in the U. S., or approximately 10,000 new cases each year.  There have not been any overall incidence studies of SCI in the U.S. since the 1970’s, therefore it is not known if incidence has changed in recent years.

Prevalence:
The number of people in the United States who are alive today and who have SCI has been estimated to be between 721 and 906 per million population. This corresponds to between 183,000 and 203,000 people.

Age at injury:
SCI primarily affects young adults. Fifty-six percent of SCIs occur among persons in the 16 to 30 year age group and the average age at injury is 31.7 years. Since 1973, there has been an increase in the mean age at time of injury. Those who were injured before 1979 had a mean age of 28.6 while those injured after 1990 had a mean age of 34.8 years. Another trend is an increase in the proportion of those who were at least 61 years of age at injury. In the 1970’s, persons older than 60 years of age at injury comprised 4.7% of the database. Since 1990, this has increased to 9.7%. This trend is not surprising, since the median age of the general population has increased from 27.9 years to 33.1 years during the same time period.

Gender:
Overall, 81.8% of all persons in the national database are male. This greater than four-to-one male to female ratio has varied little over the 25 years.

Ethnic groups:
A significant trend over time has been observed in the racial distribution of persons in the Model System database. Among persons injured between 1973 and 1978, 77.5% of persons in the database were Caucasian, 13.5% were African-American, 6% were Hispanic, 2% were American Indian and 0.8% were Asian. However, among those injured since 1990 only 57.4% were Caucasian, while 28.4% were African-American, 9.2% were Hispanic, 0.4% were American Indian, 1.9% were Asian (and 0.4% were unknown).

Neurological level and extent of lesion:
Persons with tetraplegia (51.9%) have sustained injuries to one of the eight cervical segments of the spinal cord; those with paraplegia (46.7%) have lesions in the thoracic, lumbar, or sacral regions of the spinal cord. For the remaining persons, 0.7% recover prior to discharge and 0.7% are persons for whom this information is not available.

Causes:
Since 1990, motor vehicle crashes were the leading cause of SCI injuries reported. The next largest contributor were acts of violence (primarily gunshot wounds), followed by falls and recreational sporting activities. The proportion of injuries due to motor vehicle crashes and sporting activities have declined while the proportion of injuries from acts of violence has increased steadily since 1973.

Costs:
Lifetime costs: Average yearly health care and living expenses and the estimated lifetime costs that are directly attributable to SCI vary greatly according to severity of injury:

Estimated lifetime costs by Age at Injury (discounted at 4%)

These figures do not include any indirect costs such as losses in wages, fringe benefits and productivity which could average almost $46,000 but vary substantially based on education, severity of injury and pre-injury employment history.

Life Expectancy:
Life expectancy is the average remaining years of life for an individual. Life expectancies for persons with SCI continue to increase, but are still somewhat below life expectancies for those with no spinal cord injury. Mortality rates are significantly higher during the first year after injury than during subsequent years, particularly for severely injured persons.

Cause of death:
In years past, the leading cause of death among persons with SCI was renal failure. Today, however, significant advances in urologic management have resulted in dramatic shifts in the leading causes of death. Persons enrolled in the National SCI Database since its inception in 1973 have now been followed for 25 years after injury. During that time, the causes of death that appear to have the greatest impact on reduced life expectancy for this population are pneumonia, pulmonary emboli and septicemia.

Residence:
Today 91.7% of all persons with SCI who are discharged alive from the system are sent to a private, non institutional residence (in most cases their homes before injury.) Only 4.6% are discharged to nursing homes. The remaining are discharged to hospitals, group living situations or other destinations.

Marital status:
Considering the youthful age of most persons with SCI, it is not surprising that most (53.6%) are single when injured. Among those who were married at the time of injury, as well as those who marry after injury, the likelihood of their marriage remaining intact is slightly lower when compared to the uninjured population. The likelihood of getting married after injury is also reduced.

Length of stay:
Overall, average days hospitalized in the acute care unit for those who enter a Model System immediately following injury has declined from 26 days in 1974 to 14 days in 1997. Similar downward trends are noted for days in the rehab unit, from 115 days to 46 days. Overall, mean days hospitalized (during acute care and rehab) were greater for persons with neurologically complete injuries.

Disclaimer: The above information was taken directly from the Foundation for Spinal Cord Injury Prevention web site.  It is meant for educational purposes only.

What is Spinal Cord Injury?

What is the spinal cord and the vertebra?

The spinal cord is about 18 inches long and extends from the base of the brain, down the middle of the back, to about the waist. The nerves that lie within the spinal cord are upper motor neurons (UMNs) and their function is to carry the messages back and forth from the brain to the spinal nerves along the spinal tract.  The spinal nerves that branch out from the spinal cord to the other parts of the body are called lower motor neurons (LMNs). These spinal nerves exit and enter at each vertebral level and communicate with specific areas of the body. The sensory portions of the LMN’s carry messages about sensation from the skin and other body parts and organs to the brain. The motor portions of the LMN’s send messages from the brain to the various body parts to initiate actions such as muscle movement.

The spinal cord is surrounded by rings of 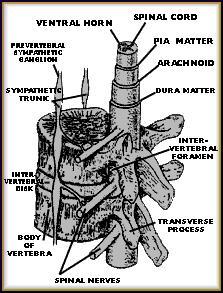 bone called vertebra. These bones constitute the spinal column (back bones). In general, the higher in the spinal column the injury  occurs, the more dysfunction a person will experience. The  vertebra are named according to their location. The eight vertebra in the neck are called the Cervical Vertebra. The top vertebra is called C-1, the next is C-2, etc. Cervical SCI’s usually cause loss of function in the arms and legs, resulting in quadriplegia. The twelve vertebra in the chest  are called the Thoracic Vertebra. The first thoracic  vertebra, T-1, is the vertebra where the top rib attaches.

Injuries in the thoracic region usually affect the chest and the legs and result in paraplegia. The vertebra in the lower back between the thoracic vertebra, where the ribs attach, and the pelvis (hip bone), are the Lumbar Vertebra. The sacral vertebra run from the Pelvis to the end of the spinal column. Injuries to the five Lumbar vertebra (L-1 thru L-5) and  similarly to the five Sacral Vertebra (S-1 thru S-5) generally result in some loss of functioning in the hips and legs.

What are the effects of SCI?

The level of injury is very helpful in predicting what parts of the body might be affected by paralysis and loss of function. Remember that in incomplete injuries there will be some variation in these prognoses.

Cervical (neck) injuries usually result in four limb paralysis.  This is referred to as Quadriplegia.

Injuries above the C-4 level may require a ventilator for the person to breathe.  This is because the diaphragm is controlled by spinal nerves exiting at the upper level of the neck.  The well documented horse riding accident of Christopher Reeve (Superman) resulted in a ‘complete’ spinal cord injury above C3 and he now has to use a mechanical ventilator via a hole in his throat to breathe.

C-5 injuries often result in shoulder and biceps control, but no control at the wrist or hand. C-6 injuries generally yield wrist control, but no hand function. Individuals with C-7 and T-1 injuries can straighten their arms but still may have dexterity problems with the hand and fingers.

Injuries at the thoracic level and below result in paraplegia, with the hands not affected. At T-1 to T-8 there is most often control of the hands, but poor trunk control as the result of lack of abdominal muscle control. Lower T-injuries (T-9 to T-12) allow good truck control and good abdominal muscle control. Sitting balance is very good. Lumbar and Sacral injuries yield decreasing control of the hip flexors and legs.

Besides a loss of sensation or motor functioning, people with SCI also experience other changes. For example, they may experience dysfunction of the  bowel and bladder,. Sexual functioning is frequently impaired or lost with SCI.  Men  may have their fertility affected, while a women’s fertility is generally not affected.  Other effects of SCI may include low blood pressure, inability to regulate blood pressure effectively, reduced control of body temperature , inability to sweat below the level of injury, and chronic pain.

It is not what happens to you that determines your fate but what you do about it.

This website will cover topics of interest to its’ reader and please feel free to recommend topics to be covered.